With an historic election just behind us we wait with bated breath to see what the future holds.

Here is a review of the two candidates through the lenses of the Essence Leadership model.

For those new to the model, it is a simplified way to look at leadership that helps individuals and organisations create better, stronger leaders.

You can learn more watching my TED Talk or reading my original article.

In summary, here are the three dimensions and their meaning.

Any individual or collective that has something personal and specific to bring to life.

The context you occupy and the people within it, with the potential to become followers.

The tools, skills and actions you use to bring yourself and your audience on the same journey.

This was probably Clinton's downfall.

As a career politician she embodies the interests and values of the establishment.

This puts a veneer around Hilary Clinton that makes her true values and beliefs hard to seep through.

This is also illustrated by the consistent commentary about people feeling they can't trust her and her being unauthentic.

To compound the issue further, Clinton had a whole raft of surrogates who were campaigning on her behalf: The Obama, Joe Biden, Bill Clinton, Chelsea Clinton and a raft of celebrities, further diluting her personal image into the establishment machine.

And so while a large portion of the American population connected to Clinton for what she represented politically, few could probably connect to a deeper more personal version of her.

While at times sounding like a sociopath and while clearly being a racist and misogynist, Trump showed his true colours and people always connect to those.

Remember leadership is not about style or content, leadership is the ability to connect with people and inspire them to join you on your journey.

Unlike Clinton, Trump spoke his message alone. In fact the very establishment he represents was quick to distance itself from him and the crazy, crazy thought and behaviours he expressed.

On a side note, it'll be interesting to observe them all flocking back to him now that he has power. Hypocrites!!!!!

The "right" audience for a leader is the one that connects to his or her story and organically wants to join the journey.

Clinton sought to convert several of the red states into blue and gave for granted that the historical blue states would be blue by default (i.e. Wisconsin, which she failed to visit since April).

This is the equivalent of a passionate French literature scholar trying to expound the beauty of French literature among a club of heavy-metal music lovers (only an example people. Not the two things can't go together, just trying to draw the contrast between a message and the likely receptivity of an audience).

Had she focused on campaigning on a more balanced way, she could have multiplied her power of influence by further galvanising people who already connected with her.

Trump has never run for office and had no benchmark to go to.

In fact some political commentators said that Trump ignored much of the methods and advice the Republican strategic advisors offered and chose instead to analyse his electoral base through methods that are more aligned to consumer behaviours analysis rather than political affiliations.

He moved across America between red and blue states building an audience from scratch.

He spoke his message, collected intelligence and refined his strategy for audience building along the way.

It clearly proved to be the more effective strategy.

Of the three this is the least remarkable difference between the candidates.

Interaction is about the tools and the skills that a leader has access to to meaningfully connect with their audience.

Both Clinton and Trump had access to vast budgets, and both possessed supreme communication skills.

This is not about style or content, on which the candidates clearly differ. It is about the ability to convey meaning to one's audience, so it connects, lands and sticks.

Some of Trumps communication skills are questionable (i.e. the childish "Wrong! Wrong! Wrong! ... Wrong!"), but it clearly didn't bother America enough. It seems like their daily pains, which they believe driven by the establishment, far outweighed being offended by a brush communication style or some "locker room talk".

Leadership needs, but it is not execution. Leadership is the ability to inspire someone to follow us on our journeys.

Clinton thought she had it in the bag, the world thought Clinton had it in her bag, but Trump proved to be a much stronger leader and achieved what everybody thought was unachievable.

Something to ponder on!

I base my posts on real case studies and I regularly write about relationship, leadership and sexuality questions. If you would like to read my future posts, please join us here. 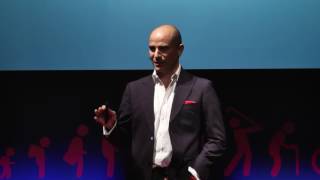 Essence, the sailor and the port

“It’s too late when we die”

Reflections On Being Perfect

Panda wisdom and the secrets to a fulfilling life

Life Lessons From A 3 Year Old

How to change your life, without giving your job up.

How To Improve Engagement Without Putting Leaders On the Firing Line